Nottingham, UK – Growing from a small local shop to a hugely successful international enterprise in the space of two decades is not easy. Achieving this success while advancing and upholding deeply held ethical principles makes the accomplishment all the more noteworthy. Management at Lush Cosmetics recognized this, which is why they wanted to make their company’s 20th anniversary celebration stand out. That’s precisely what they did, thanks to some help from Presentation Design Services and a collection of fixtures from CHAUVET Professional.

Lush Cosmetics first appeared on high streets throughout the UK in the mid 1990’s. In the ensuing years, the organic beauty merchant has carved out a well-deserved reputation for quality handmade beauty products, all the while upholding the ethics-conscious principles of fair trade and protecting animal rights.

In celebration of this 20-year milestone, Lush Cosmetics drew once again upon the support of longstanding event production company Presentation Design Services (PDS) to provide full production support to the event. In addition to designing and building the custom manufactured set, which featured around 200 reclaimed pallets, PDS, as customary, called upon their extensive array of CHAUVET Professional fixtures to empower the event with a magnificent visual aesthetic.

“Once again, CHAUVET Professional fixtures played a key part in our production design for the Lush Cosmetics event – one of our longstanding clients,” commented James Johnson, Project Manager at PDS.

With over 2,000 people attending the two-day conference at the BIC venue in Bournemouth, England, Lush required a sizable amount of visual support to create an event worthy of a 20th anniversary celebration.

“We supplied 254 Chauvet PVP S5 LED panels to create a video wall, which was split into three different screens,” enthused Johnson. “The main central screen played a key part in the set design, consisting of 190 panels, and the two side screens mainly showed live camera feed and VTs to further engage the audience. Thanks to the pin sharp PVP panels, we were able to build quite a spectacle for the Lush presentations.”

One of the other key lighting fixtures employed by Johnson and his team were CHAUVET Professional Nexus Aw 7×7 panels. Having utilised the Nexus Aw 7×7 fixtures for their sharp warm white focused beams on several Lush events previously, Johnson and his team have certainly found a great tool to create a certain concert-esque atmosphere inside what is essentially a corporate event.

“The stars of the show were, hands down, the Nexus Aw 7×7 panels,” conceded Johnson. “We employed the Nexus fixtures to back light the pallet wall. The superb colour temperature and punchy beams provided an excellent solution to back lighting the reclaimed pallet wall.”

Also making an appearance at the event was the usual raft of CHAUVET Professional fixtures from the extensive PDS arsenal, including several CHAUVET Professional Rogue R1 Spots and Beams. “While spots were used as gobo washes across the set and stage, the beams were added to really create that classic performance look for the various performing bands throughout the event,” commented Johnson.

“Thanks to our CHAUVET Professional fixtures, we were able to create a versatile and varied palette for the Lush conference,” concluded Johnson. “It was certainly an event fit for a 20th anniversary.” 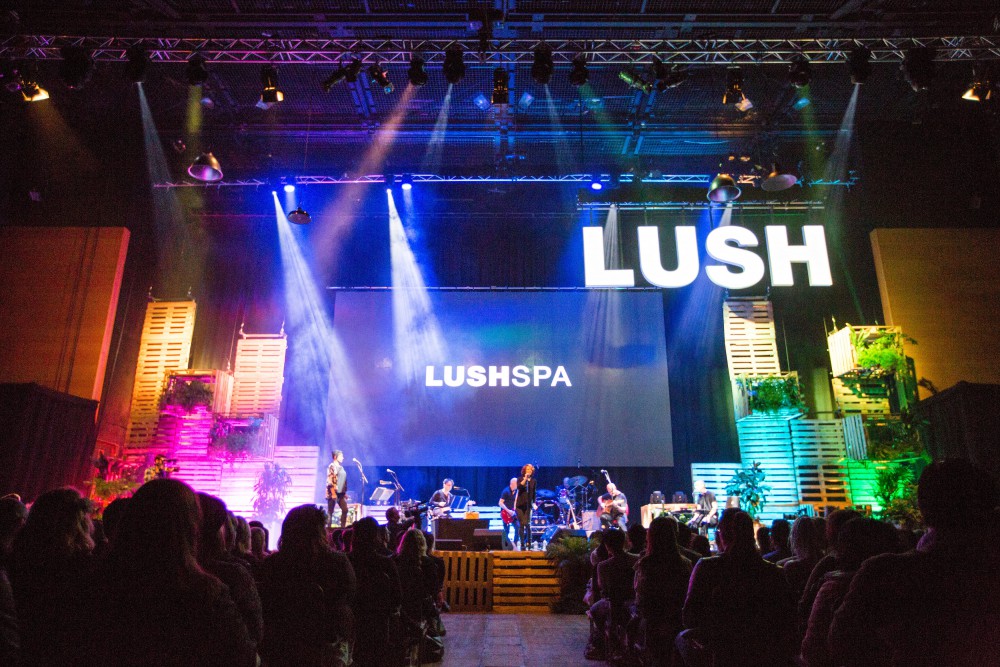