BOSTON – Journalists from far beyond New England are used to coming to Westin Copley Place to cover news.  US presidents and Supreme Court justices have frequently given speeches here, and one would-be Commander and Chief, Mitt Romney, used it as his primary election night headquarters.

Recently, though, members of the fourth estate visited the elegant hotel on the banks of the Charles River to make news, rather than cover it, by participating in the 39th annual Boston/New England Emmy Awards. The high-profile event, which has helped propel many careers to national stardom stature, draws journalists from six states.  Setting an appropriately elegant tone for the evening ceremonies was a glitzy video wall and lighting display created by Darren Lussier of Image Production Services, using an array of CHAUVET Professional fixtures and video panels.

“This is the big night for the media in this region,” said Lussier. “Since the guests at this event are people who are involved in television, obviously a visual media, we knew that the looks we created would be seen by knowledgeable eyes. A reason we selected the rig that we went with was that we knew it could give us very vivid colors and video images.”

Lussier used 68 CHAUVET Professional LED tiles to create prominent video walls behind the stage and to either side of it. The video wall behind the stage was positioned to shine through a set fabric to create softer, more captivating images for the live audience as well as the television cameras.

“We showed logos and text, as well as spinning Emmy logos on the tiles, plus animated patterns to accent what was happening on stage during particular moments of the evening,” he said. “The LED wall showed clips of various specials and other programs that were nominated for awards. The resolution was excellent for what we were showing, and the brightness of the tiles made it easy to have the images shine through the scenic fabric.”

The vertically oriented video walls on either side of the stage were built with 36 PVP X3 tiles. A collection of 32 MVP Ta8 Curve tiles were used to create the wall behind the scenic curtain.

In addition to the video wall, Lussier created visual excitement during the show with aerial, stage and audience lighting, courtesy of four Rogue RH1 Hybrids and eight Q-Wash 560Z-LED washes that were mounted on truss stands and the stage deck. “The output of these fixtures really raised the level of the show for the audience,” he said. “The split colors of the Rogues created some looks that went beyond what you’d expect at this kind of event. Our crisp gobos also generated a lot of favorable comments”

To colorize the room, Lussier relied on 24  COLORado 4 IP linear RGBW wash lights and 36 CHAUVET DJ Freedom Par fixtures.  Positioned on the periphery of the spacious ballroom, these colorizing fixtures were used to uplight walls, creating a more intimate environment.

“I think we achieved a nice balance at this event,” said Lussier. “The lighting was stylish, but very inviting, and we created some exciting looks without being distractive. At the end, we got a lot of nice compliments, which meant a lot, given that this is an audience that deals all day in visual presentations.” 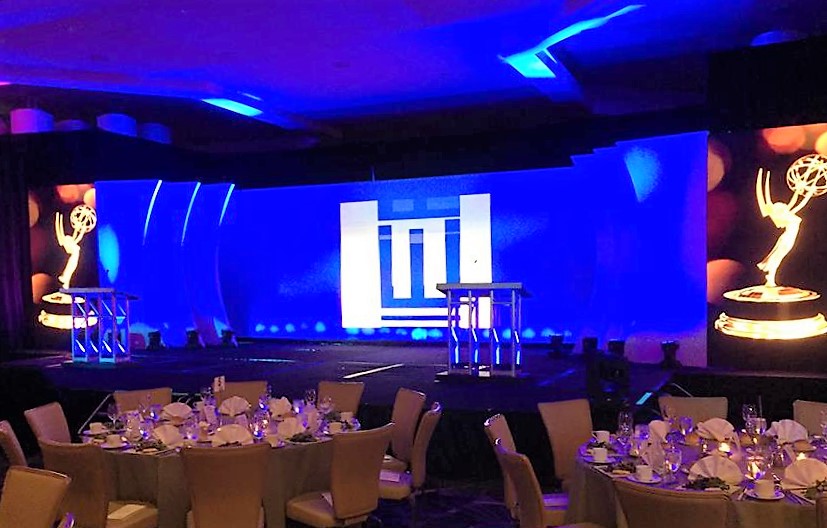