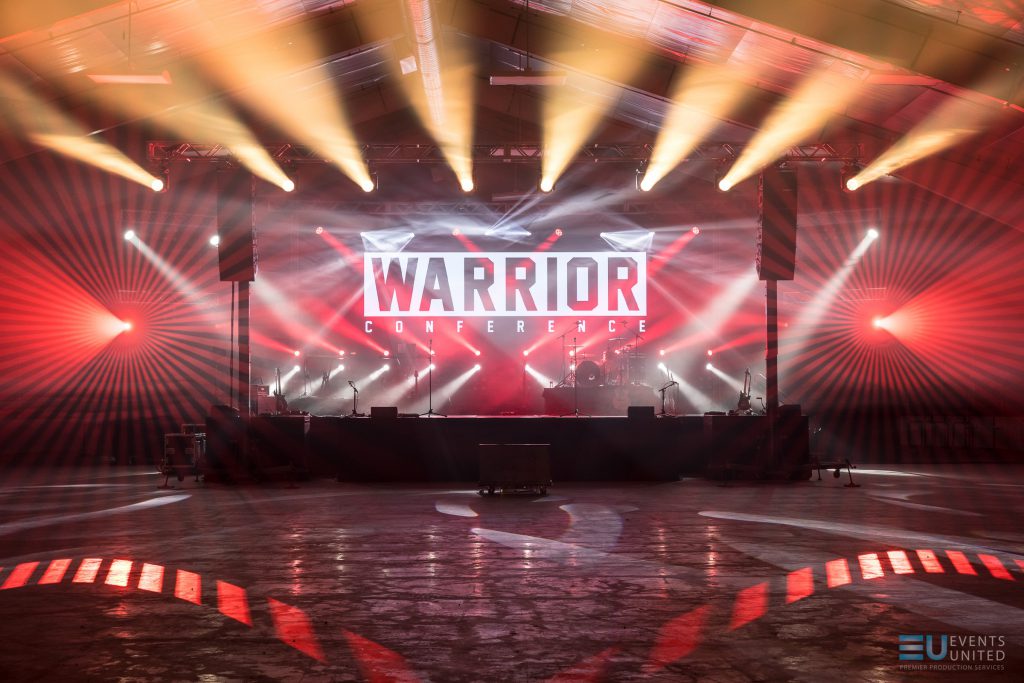 WATERVILLE VALLEY, NH – The six-campus Granite United Church has never rested when it comes to spreading its message and touching lives. By 2014, its three day Warrior Conference for men had already established itself as one of the largest religious gatherings in the Northeast, but the church was looking to make the event even more relevant. With this in mind, it broke with a 16-year tradition of doing its own lighting, audio, video, and staging and retained an outside production company, Events United.

After seeing how the professional work by the Londonderry, NH production house infused the conference with an extra degree of motivational power, Gregg Dicecca, the church’s Creative Arts Pastor, approached Events United about taking things a step further by creating a coordinated lighting and LED video production. In early June, this vision came to pass with a transformative production that featured an extensive collection of CHAUVET Professional fixtures and video tiles. 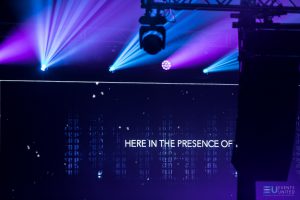 “We have enjoyed a longtime relationship with this church,” said Tim Messina of Events United. “In the past, they would get all their campuses together and use the equipment we sold them for this conference. As the conference grew, however, it got to the point where they wanted a more professional production, so they brought us onboard as their production company. We kept building the production to new levels, and this year Gregg worked with us to push it even higher.”

Part of reaching new heights in 2017 involved replacing the conference’s two projection screens on the sides and a single 14’ projection screen in the center of the stage with a 28’ wide by 8’ high LED video wall made of 85 PVP X6IP 6.9mm panels. “Eliminating the old projected side screens allowed us to go wider with our lighting,” said Messina. “We wanted the lighting rig to be wider and more immersive, while also making a room with a relatively low ceiling look bigger.”

Events United sized the center video wall to fit the stage at the conference’s rented venue, the Waterville Valley Ski Resort. Jon Martell, the company’s lead video engineer, created a mask for the church’s video team so they could develop content to fit the wall. Brightness of the high output panels was dialed down to about 15% to balance them with the lighting. 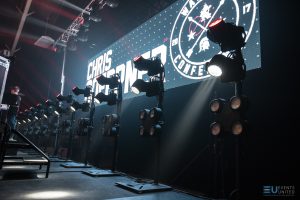 Adding a dramatic effect to the video wall was light from the four COLORado 2 Solo washes in the rig. Positioned behind the wall, these fixtures were used to shine light through the open louvers of the PVP panels. “It looked awesome when we shined light from the COLORados through the video wall,” said Messina. “This had a dramatic effect when the video wall went to a black background with white text and a white border.  A thing that really contributed to the immersive quality of this production was the way video and lighting worked together.”

Anchoring the lighting part of the production was a collection of Maverick moving fixtures. Events United used six Maverick MK1 Hybrids, four Maverick MK2 Spots and 12 Maverick MK2 Washes. Messina and his team flew the Maverick Hybrids along with four of the MK2 Washes across upstage truss to provide back lighting and to texturize the stage.

The Maverick Spots were positioned on two outside towers. “Our MK2 Spots really made this rig come alive and let us get some huge looks, using only four of them,” said Messina. “Their gobos gave us a lot of unique looks. The spots are also very bright, especially for LED fixtures, which helped balance our video wall.”

The remaining eight Maverick Washes in the rig were positioned downstage and performed as stage washes as well as blinders at the end of the conference. “We used them to add extra energy to the last song,” said Messina. 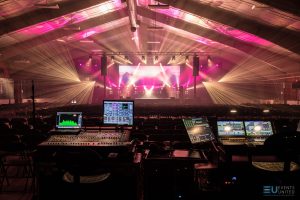 Music was an important part of the Warrior Conference. Serving as a backdrop for the band was a collection of 20 Rogue R1 Wash moving lights and 10 STRIKE 4 multi formatted fixtures. The Rogues and STRIKE 4s were placed on 10 pipe uprights, each 5’ high, positioned along the back of the stage.

“We had two washes and one STRIKE on each pipe, just below the video wall,” said Messina. “This allowed Ryan Lane, our LD, to create fast moving patterns with the R1s as well as push through some serious punch with the STRIKEs when he needed big hits. There were four other STRIKE 4s hanging on the outside towers that acted as blinders, strobes, and house lights. Ryan was easily able to match the color temperature of all the Mavericks and R1s to the STRIKEs to make the whole rig look tungsten- it was a beautiful sight!”

Given Granite United Church’s track record of constantly looking for new ways to improve and reach worshippers, it’s safe to assume that it’s also a sight that will be repeated and enhanced at next year’s Warrior Conference. 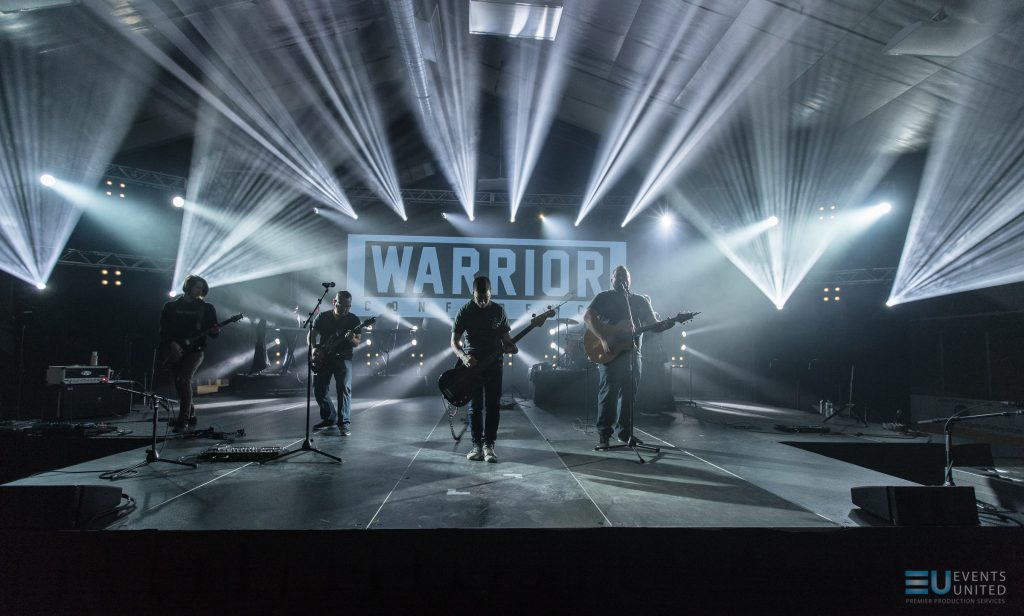 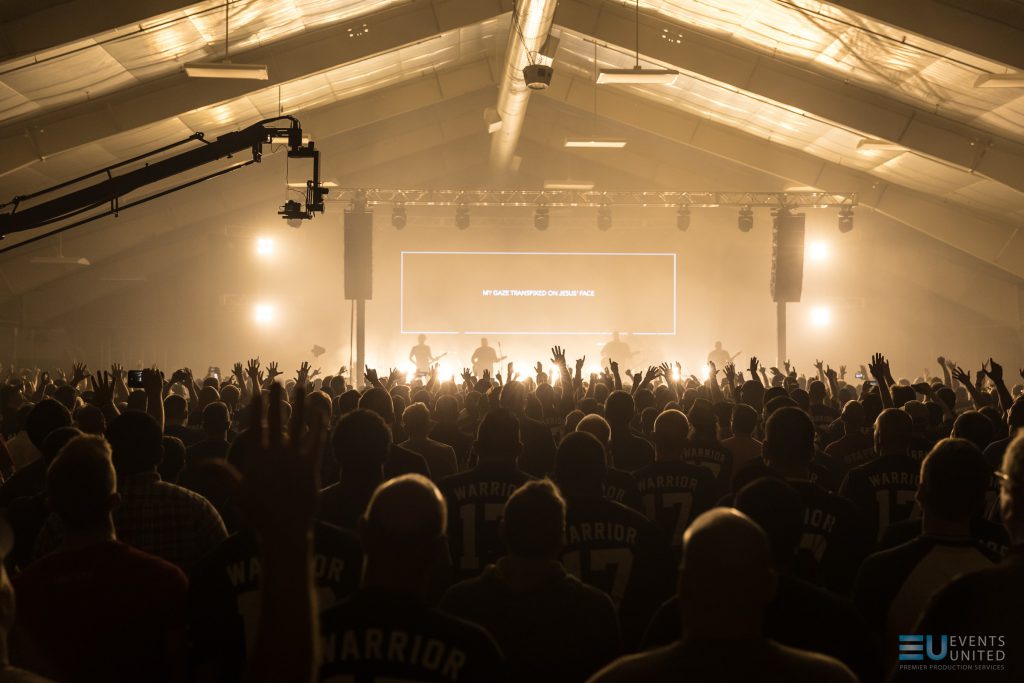