ATLANTA – The Rialto Center for the Arts has seen its share of inspired performances since it opened its doors in 1916, but it’s doubtful that anything in the 100-year history of this legendary venue ever surpassed the raw energy level at the BMI Trailblazers Awards. Sponsored by the largest music rights organization in the US, the invitation-only event honored the outstanding achievers in Gospel Music. The brightest stars in the Gospel genre were there, including Grammy-winning sibling acts, BeBe & CeCe Winans and Mary Mary; so too were R&B stars. Together, they rocked the house during the ceremonies with full-throated renditions of contemporary and classic songs, visually reflected in all their roaring glory by dynamic displays on CHAUVET Professional video panels.

“The panels were a big part of what we did to support the stage energy and frame the action for the TV audience,” said Todd Finch, principal of MAGNUM, which supplied the lighting rig that included the panels. The design and control of the video panel displays were done by Scott Chmielewski and his team at DMDS7UDIOS of Miami.

“We did more than show IMAG videos of the performers and presenters on the panels,” said Finch. “Scott and his team did a great job creating and running content for the panels. Their images really captured the aura of the evening.”

A total of 57 PVP S5 panels were used in the set design for the awards ceremony. The panels were used to build three structures: a massive oval made of 45 tiles, a large square made of eight tiles and a smaller 4-tile square. Arranged so that they almost overlapped, the two squares were positioned stage left, while the larger oval occupied a dominant position upstage center.

Created to funnel vision to the center of the stage, the lighting design featured five overhead truss structures that became progressively narrower as they moved upstage. A collection of over 100 moving fixtures and LED pars was flown from the first four truss bars. The oval video structure hung impressively from the fifth and final bar.

“The oval was hung from the truss so it basically looked like it was floating in space,” said Finch. “The oval was steel frame with a kind of white plastic tubing facing and LED tape around it for glow, so it looked elegant. The structure really reflected light well, and when we hit it with light from the moving fixtures, it didn’t bother the Chauvet panels, because they have such a bright output.”

Arranging the panels in an asymmetrical configuration added an extra dimension to the video displays. For example, showing the same patterns on different sized and shaped panels created interesting variations in perspective, which drew the audience’s attention toward center stage. Also, by breaking up rapidly moving patterns in different configurations, the design team added to the impact of the ceremony’s passionate performances.

Another key advantage of the varied panel configurations was that they created different looks for television cameras for the national cable broadcast of the event. At the same time, having the same oval configured panel consistently appear in the background provided a sense of continuity for TV viewers.

“Balancing the demands of live and broadcast applications was especially important at this ceremony,” said Finch. “The Rialto is prestigious, but it isn’t very big (833 capacity). So we needed to have high-output displays to engage the live audience, but at the same time we needed nice chunky looks that would work well on TV.”

Controlling the rig with two grandMA2 consoles (one for light, the other for video), the MAGNUM and DMDS7UDIOS teams were able to achieve this balance. “We received a lot of nice compliments on this design,” said Finch. “That meant a lot considering the prestigious level of the audience. 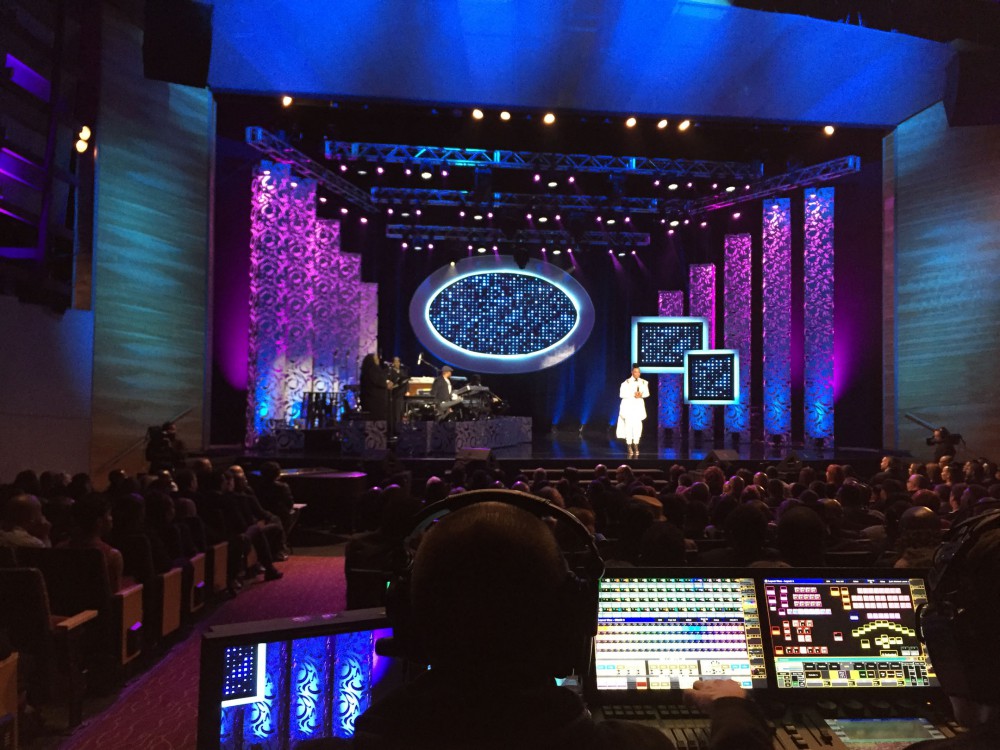