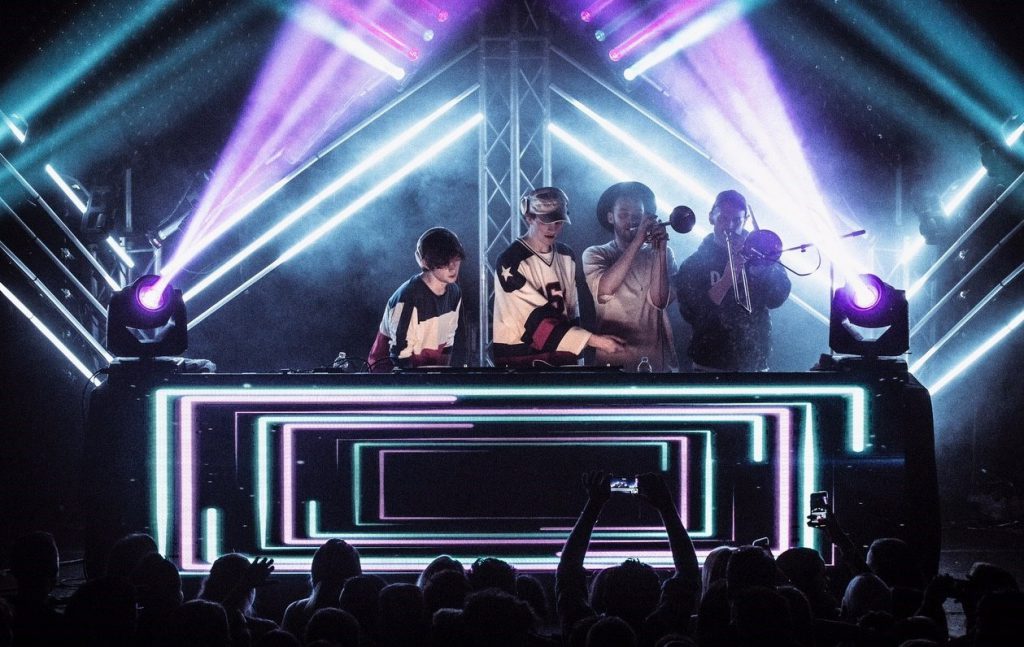 AUSTIN, TX – Magical is a word that is often ascribed to Louis The Child’s spacey, ethereal sound. It also accurately describes this EDM duo’s phenomenal career path. Formed by two high school friends, Robby Hauldren and Freddy Kennett, the group was playing Chicago-area clubs in 2015, when they released what would become their breakout hit, “It’s Strange.” The song got a high-profile public shout-out from Taylor Swift, who put it on her own playlist, and quickly went on to earn 10 million SoundCloud plays.

Other hits soon followed as did appearances at Coachella and Lollapalooza. For all their success, however, Louis The Child isn’t interested in cranking out formularized festival bangers.  Their focus instead is on creating unique music that captures real moments, or as they once put it in an interview, “songs that are going to become the soundtrack to your life.” This spirit is very evident on the duo’s current tour, not only in its music but also in its immersive and highly original lightshow designed by Kendall Clark and programmed by Andrew Roman, using all CHAUVET Professional fixtures supplied by Creative Production & Design (CPD) of Austin, Texas.

Like the music of Louis The Child, the lightshow on the group’s sold-out 21-city tour, is powerful, evocative and very approachable.  “The lighting really reflects the music and what these artists are all about,” said Justin Jenkins of CPD. “Kendall’s design manages to be complex without being complicated. It isn’t just massive for the sake of being big; every fixture in the rig has a purpose and it contributes to telling the story we want to tell.”

A big part of this story telling comes from the 18 Rogue R1 FX-B fixtures in the rig. “We have a lot of these fixtures in our inventory, and we use them often because there are so many looks you can create with them,” said Jenkins. “They are a truly unique fixture that really helps you add depth and texture to a design without taking up a lot of space.”

On the Louis The Child Tour, 12 of the Rogue R1 FX-B fixtures are used to outline a three-pointed crown (the group’s logo) that was made of pipe and truss and occupies a dominant center stage position. The remaining six units are mounted three apiece on two truss totems that are positioned stage left and right. Those Rogue R1 FX-B fixtures that outline the logo are mounted on a 90° axis with the menus facing down, while the off-stage vertical Rogues are mounted with the menus facing on stage.

“The FX-Bs are incredibly expressive fixtures; they really are the star of the show. They are capable of so much more than just infinite rotation,” said Clark, the principal lighting designer. “Once you line up 90 individual beams in a cohesive element on stage, you can create strong dense linear looks for sharp hits, or utilize a tilt effect with timing delays to get really nice fluid geometric patterns.”

Clark often plays the Rogue fixtures like an instrument, using them for some intricate chase scenes during Louis The Child’s performance. “I was a drummer before I got into lighting so when I’m behind the console, I want to be playing an instrument, not just hitting Go,” he said. “The FX-Bs lend themselves to being played. When you have such a large element in your stage design, the simplest tricks can be really effective. I have the following tricks on independent executers that really allow me to play the lights:  Medium looping outline chase; -Slow sparkle chase N Shot streaks (symmetric in/out); N Shot Streaks (L > R // R < L); and 2 group strobe (On stage 6 units / Off stage 12 units).”

For intensity, the FX-Bs are split into a dynamic A/B group system. Clark’s two intensity faders have two cues each. The first cue is A1/B1 with the fixtures grouped by whole units (5 cells, 5 cells). In Cue 2, this is switched to alternating cells. Clark’s color control follows the same scheme. “This makes it easy to call up monochromatic looks, bigger aggressive two color looks with A1/B1 (whole unit symmetric odd/even) or more subtle two color looks with A2/B2, where the cells are split into a symmetric odd/even,” he explained.

The Louis The Child rig also includes 32 ÉPIX Strip Tour 1-meter LED strips, which are used to fill in the volume under the Rogue FX-B crown structure; four Legend 230SR Beams, mounted on the deck as well as the DJ booth and used for aerial effects; ten Nexus Aw 7×7 panels; two Amhaze II foggers; and 14 PVP X3 LED video panels used to display text and breakout patterns on the face of the DJ booth.

Clark pixel maps the ÉPIX Strip Tour and Nexus Aw 7×7 panels, often coordinating their images with those displayed on the DJ booth video wall to create an immersive effect. He is running the show with a High End Systems Hog 4 and Resolume Arena media server. Stage design and pre-vis work was done in Capture Atlas. Video Content Animation was done by The VJ Collective’s Brent Bucci and Nat Leonoudakis (VJ Voodoo).

In addition to displaying pixel mapped images, the Nexus Aw 7×7 fixtures are used to fill the empty space between the peaks of the group’s logo crown. “This space was too large for any single fixture in our inventory,” said Clark. “We thought about doing an array of RGB strobes, but that didn’t seem to be an effective use of eight strobes. Finally we decided on using the Nexus panels to build a 2×2 panel and rigged it on a diamond orientation. This perfectly filled the negative volume in the rig, as well as adding a unique element to the show.”

Such “unique elements” are evident throughout this lightshow, just as they are in Louis The Child’s music. Perhaps this is why both seem to connect to every member of the audience on a very personal level. 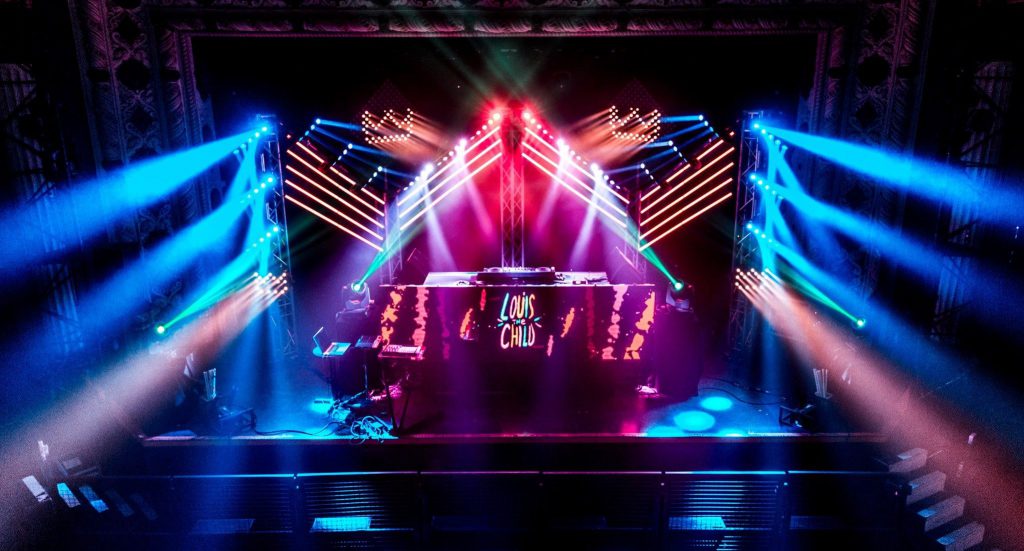